LBA11
LBA12
LBA13
LBA14
LBA15
LBA16
LBAdrone1
Here’s a photo we took after we finished cleaning the property last summer and before we had seeded. Since this photo was taken, the electric coop has cleared their right-of-way, making it easy to walk back to the north creek.


This morning I have a uniquely attractive 5.07-acre parcel of land to tell you about. Unfortunately, for you, there’s quite a lot to tell, and unfortunately for me, some of it is kinda not good, so, you may want to find a comfortable chair.


The Saga of Lillium Brook Parcel A


I have been personally acquainted with This Week’s Featured Property—five acres of dense, eastern-red-cedar forest—since it was a meadow. This forest is now so dense that I can only describe the back half of the property from my memory, as the woods have been far too thick and I am far too lazy (as well as somewhat of a sissy) to want to thrash my way through it with a machete.

But that’s only part of the story. Years—and I mean years—ago, we sold this property to an old gentleman who built a small cabin on it. Back then, we had most of the same rules regarding the property that we do now, but being naive, in addition to lazy and timid, we didn’t actually make any effort to determine whether our rules were being followed. Dan was friendly and quiet, always paid his bill on time, and when I had occasion to work at that location, we always had a nice chat. So I considered him a friend and wanted to respect his privacy, so I never actually went down to the cabin. This went on for years.

Then one day, Christi brought it to my attention that we hadn’t received a payment from Dan for quite some time, and upon investigation, I discovered that he had just up and left the area without leaving a forwarding address. In cases such as this, we never know exactly what to think. Was Dan hiding out from the Mafia? Had he discovered a steamy septuagenarian romance? I wanted to give him more time to catch up on his payments if he was in dire straits. We were able to trace him to a trailer park in the southwest, where the trail went cold. I spent a short time imagining perhaps that Dan had contracted a fatal disease (pre-covid) and gone off somewhere to die like an old elephant, and because he and I were such good buddies, he was abandoning his considerable equity in the property to me. (I mentioned the naivete, right?)

So then, it behooved me to visit the property and discover what I’d inherited. I remembered the parcel as one of the nicer five-acre tracts we’ve ever had: two pretty little creeks, lots of level land at the end of a short, good road near pavement (or if you’re a city person: a long, awful road, miles away from anything). It’s half a mile from Missouri State Highway 137.

First of all, the tiny cedar trees that dotted the meadow in a previous decade were now all about 20 feet tall and spaced so closely that they were shading out the grass. No surprise there; if you don’t mow a field at least annually, it becomes un-mowable quicker than most folks realize. Then, when I wandered through the darkened path to the cabin, I discovered why Dan had decided to walk away from everything he’d accumulated over the years.

Apparently, Dan had been attempting to corner the market in plastic milk jugs. I’m certain he must have strong teeth and bones, wherever he is, because it appears that he must drink four gallons of milk every day, and when he finishes one, he tosses the empty jug out the window into a pile. What I beheld was, not so much a pile, as a small mountain. Oh, there was other stuff too, lots and lots of other stuff: a couple of dead trucks, a deceased motor scooter, old tires, broken tools, junk of an amazing quantity and variety, but it was the milk jugs that were seemingly everywhere; like stars in the sky—only closer together. There were truckloads of them. First, we tried picking them up by hand, but at the end of the day, it looked a lot like it had at the beginning of the day. “What’s the direct opposite of lactose intolerant?” we wondered, dazed, demoralized, and reeking of sour milk. Whatever it was, we figured Dan must be one.

So the decision was made to move our bulldozer to the location. First, we hauled off everything that could be recycled, then we bulldozed the cabin and the junk into one mound and burned it. Then, we cleared out an area big enough for a building spot and a large lawn. Next, we picked up the place again and buried everything that wouldn’t burn and covered the resulting bare dirt with Bermuda grass hay, and finally, we seeded the whole thing in clover.

Between diesel fuel, dumping fees, and labor costs, we spent a few thousand dollars. (Let me add here that our contract now requires you to subscribe to a local trash service if you’re living on the property.)

But! In return, it’s a more attractive parcel than ever, and it’s ready for you to move in. We cleared a path to the first creek, trimmed the lower limbs off of several of the trees we left standing, and applied four truckloads of crushed rock to the access road. Plus, the electric co-op has brought in their enormous tree mulcher and cleared out their power easement, resulting in a clear, walkable path back to and beyond the north creek.

However, except for that 50-foot electrical easement the whole back half of the parcel is currently a mystery. I’ve got some old photos from the late 90s showing the second little creek (on the north) that runs through that area, and the last time I visited the northwest corner of the property (about forty years ago), I found an old split-rail fence that was ancient back then. See if it’s still there.

A lot of the cedar trees are 8-15 inches in diameter. If you cut the lower limbs off, the results are quite nice, giving a park-like feeling. Or, if you want to just leave them alone, they’ll probably be tall enough that you can walk through them without trimming in another decade or so. Either way you want to go, this is a very pretty, peaceful, end-of-the-road place to live. There’s grid electricity and a nice cleared area for your portable cabin or larger abode.

It’s somewhat rare to find a small parcel with a reliable creek on it, much less two of them, so it may be a while before you’re offered one again. Please do check out the maps, photos, and driving directions below in this menu. We think you’ll be impressed.

I wish I could say that we were able to get the parcel completely clean. We weren’t, it rained the weekend after we finished which exposed lots of bottle cap-sized things we’d missed, so you’re going to run into small bits. As mentioned before, we seeded all the disturbed ground and a couple of years of dead grass will cover most of it.

How bad is it? Well, it’s probably going to be an annoyance for at least a couple of years, but that’s not a decision I can make. You should take the time to drive out to the property, see it for yourself and decide what you think before you make your order. 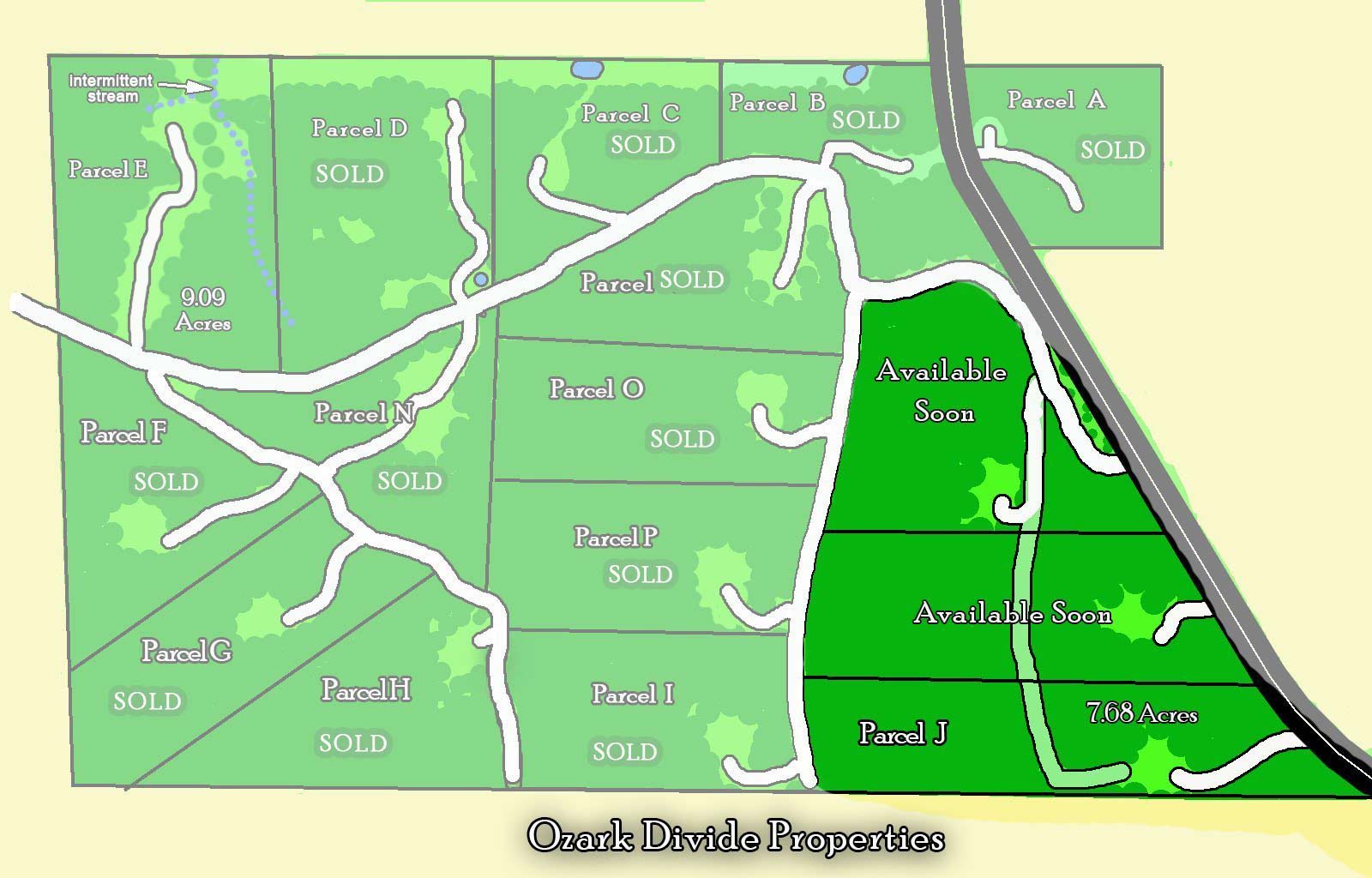 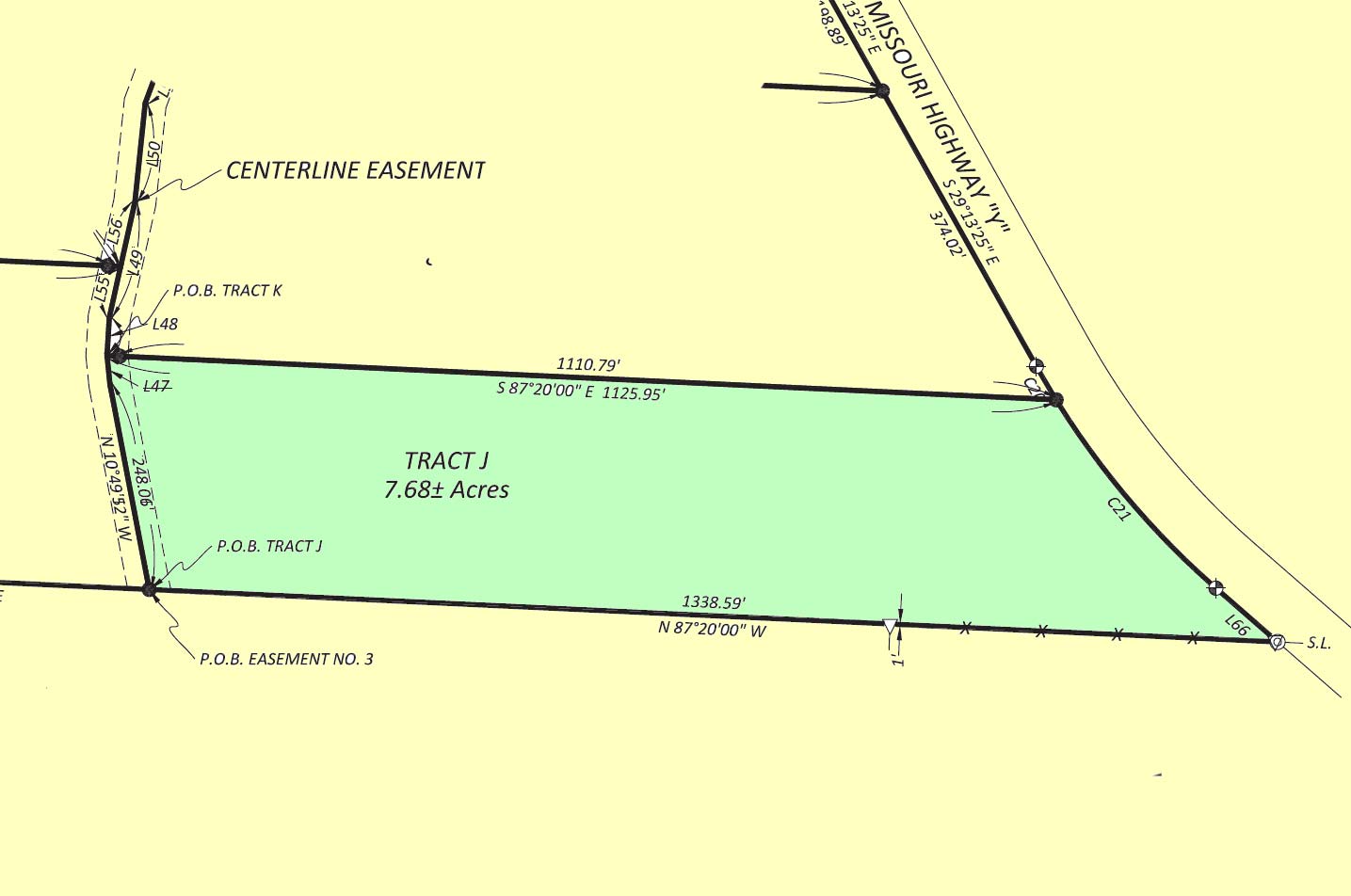 The property is about an hour and thirty minutes east of Springfield and about an hour south of Rolla. To get there, find Tyrone, MO on Highway Y in Texas County. From there proceed east to the intersection of Highways Y and 137. From there, go one mile north (left) to a gravel drive beside some telephone boxes and several mailboxes on the west (east). You'll follow this driveway across a small spring branch (gently) about 4/10ths-mile to where the road makes a right angle turn to the right, then 600 feet later, another right angle to the left (west). As you drive downhill, you'll see a pink ribbon on a t-post. That marks the southeast corner of the property. We've driven 4 t-posts with green ribbons along the south boundary. From this SW corner, the property runs to your right, north 66i feet and straight ahead, 333 feet.

No Down Payment - Warranty Deed after Six Months

Welcome to OzarkLand.com where, since 1982, we have dedicated ourselves to making Ozark Mountain land available to anyone who sincerely wants to own it, on a first-come, first-served basis. You don’t need to make a sizeable down payment, or any down payment at all—just start making the monthly payments.

All of the properties we sell are owned by us, free and clear. That means that when we pass title to you, you don't need to worry that some disinterested third party—such as a bank—may own an interest in the property. This is frequently not the case in the real estate world at large.

We give you a Warranty Deed guaranteeing the title—no lease-options, no long-term land contracts, but fee-simple title to the property after only six months' timely payments.

All of the properties featured in our inventory are available to you via our very liberal financing plan. In fact, we’ll finance your whole land purchase with less paperwork and frustration than you'd experience buying a used car, and with no hidden expenses and one low-interest rate that’s remained unchanged since 1982.

We'll set up a contract with you in return for one monthly payment. After six monthly payments, we give you a Warranty Deed to the property, and we hold a Deed of Trust and Quit-Claim Deed as security. We record the deeds at the county courthouse at our expense, and we pay all closing costs.

There are no penalties for pre-payment.

Check out the "How It Works" page for more information.